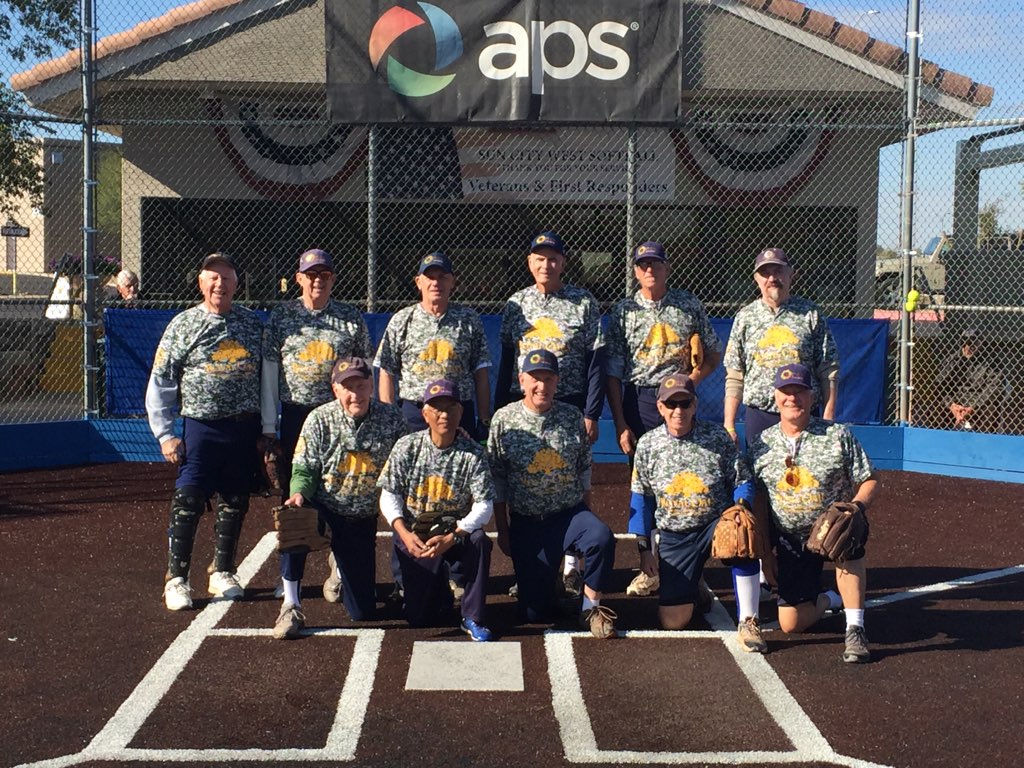 It’s a chilly morning in early January.  As the sun begins to peek above the horizonwith its warming rays; a small group of retired men and women gather and beginstretching.  Slowly at first, theystretch – soaking in the ever-warming rays of sunshine and shaking off thedesert’s cold night air.  There arewinces and groans as joints begin to loosen in the crisp morning air.   They are all wearing brightly colored shirtswith names of local businesses emblazoned across their chests.  Suddenly a “pop” sound echoes through the airas a ball lands in the pocket of a glove. More follow and soon a chorus of “pops” are filling the area.  As the dew fades across the fresh cut grass,a single person strides to a small white rectangle plate and yells out, “PlayBall.”  It’s time for Senior Softball!

Never heard of Senior Softball? Well, over 1.5 million men and women (Age 55+) currently play the sportand Sun City has several leagues.  Most ofus fondly remember our youth where we played softball or baseball.  But then careers, marriage, and children putthe game we loved on the back burner.  Now,in retirement, many senior adults are returning to the game they loved in theiryouth.  There is something special aboutplaying a team sport at a later age in life. Not only does it provides a way to stay physically fit, it provides an opportunityto develop new friends and a whole new peer group.

For Club Connect member and future Inspirata Pointe resident EmilCalleja, that statement rings true.  Emilhad never played softball and his career as a corporate tax manager kept himvery busy.  The base path took a back seatto a career path.  When he retired in 2013to Sun City West, he hadn’t thought about ever playing softball.  He was not some muscle bound ex-athlete tryingto relive his glory days.  He was just anormal everyday guy that loved softball and wanted to see if he could stillplay it.  He soon found the Sun City SeniorSoftball leagues.  Here men and women(some in their 80’s) gather to enjoy life on a ball field once again.  All players are ranked according to abilityand teams are built so they can be competitive in the league.  After a couple of years of playing, Emilwanted to take the next step and manage a team. Royal Oaks has been a team sponsor in the Sun City leagues for years andEmil asked if he could manage the team of the sponsor that would be his futurehome.  He selected his players well andon that chilly morning in January, Royal Oaks defeated Larry Ott Realty 6 to 4to notch their 15th win of the season and secure the league championship.  Not too bad for a first time manager.  After the game, there were handshakes allaround and a little bit of sadness.  Thedraft for the next season was scheduled for later in the week and it would beunlikely Emil could select all the same guys again.  Next season would have some new faces but thefriendships formed in this season will continue even when those friends are nowon opposing teams.  Oliver Wendell Holmessaid “People don’t quit playing because they grow old; they grow old becausethey quit playing.” Emil and all the rest of the Sun City Senior Softballplayers don’t plan on growing old anytime soon!

If you would like to meet peoplelike Emil and find out why we has already chosen his home at Inspirata Pointe,we invite you to make an appointment to visit our Information Center, where ournew neighborhood is showcased through digital technology. You’ll feel like youare exploring an already-built place! Call 623-815-4274 or visit www.InspirataPointe.com

Stay up to date on upcoming events!